A hydraulic fuse when incorporated in a hydraulic system, prevents the hydraulic pressure from exceeding the allowable value in order to protect the circuit components from damage. When the hydraulic pressure exceeds the design value, the thin metal disk ruptures, to relieve the pressure and the fluid is drained back to the tank. After rupture, a new metal disk needs to be inserted before the start of the operation. 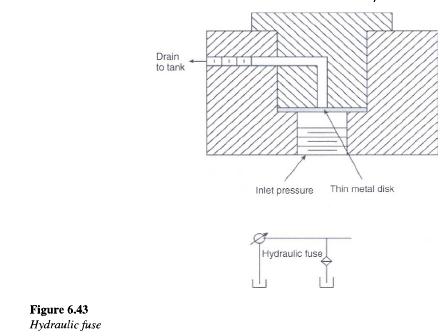 Hydraulic fuses are used mainly in pressure-compensated pumps with fail-safe overload protection, in case the compensator control on the pump fails to operate. A hydraulic fuse is analogous to an electric fuse because they both are ‘one-shot’ devices. On the other hand, the pressure relief valve is analogous to an electrical circuit breaker because they both are resetable devices.

View all posts by and