With large capacity pneumatic valves (particularly poppet valves) and most hydraulic valves, the operating force required to move the valve can be large. If the required force is too large for a solenoid or manual operation, a two-stage process called pilot operation is used.

The principle is shown in Figure 4.16. Valve 1 is the main operating valve used to move a ram. The operating force required to move the valve, however, is too large for direct operation by a solenoid, so a second smaller valve 2, known as the pilot valve, has been added to allow the main valve to be operated by system pressure. Pilot pressure lines are normally shown dotted in circuit diagrams, and pilot ports on main valves are denoted Z, Y, X and so on.

In Figure 4 16, pilot port Z is depressurised with the solenoid deenergised, and the ram is retracted. When the solenoid is energised valve 2 changes over, pressurising Z; causing valve 1 to energize and the ram to extend. 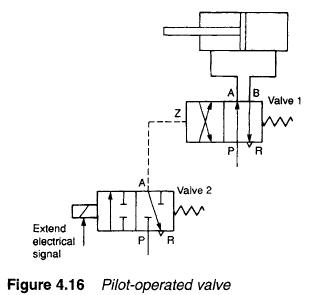 Although pilot operation can be achieved with separate valves it is more usual to use a pilot/main valve assembly manufactured as a complete ready made unit. Figure 4.17 shows the operation of a pilot-operated 3/2 pneumatic valve. The solenoid operates the small pilot valve directly. Because this valve has a small area, a low operating force is required. The pilot valve applies line pressure to the top of the control valve causing it to move down, closing the exhaust port. When it contacts the main valve disc there are two forces acting on the valve stem. The pilot valve applies a downwards force of P x D, where P is the line pressure and D is the area of the control valve. Line pressure also applies an upwards force P x E to the stem, where E is the area of the main valve. The area of the control valve, D, is greater than area of the main valve E, so the downwards force is the larger and the valve opens. 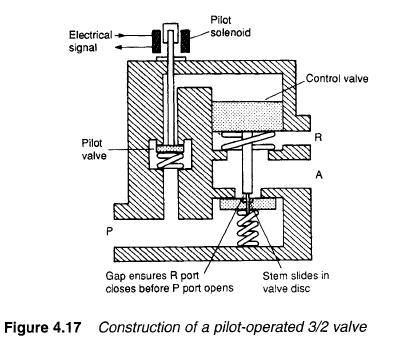 When the solenoid de-energises, the space above the control valve is vented. Line and spring pressure on the main valve causes the valve stem to rise again, venting port A.

A hydraulic 4/2 pilot-operated spool valve is shown in Figure 4.18. The ends of the pilot spool in most hydraulic pilot-operated valves are visible from outside the valve. This is useful from a maintenance viewpoint as it allows the operation of a valve to be checked. In extreme cases the valve can be checked by pushing the pilot spool directly with a suitably sized rod (welding rod is ideal !). Care must be taken to check solenoid states on dual solenoid valves before attempting manual operation. Overriding an energised AC solenoid creates a large current which may damage the coil, (or blow the fuse if the solenoid has correctly installed protection). 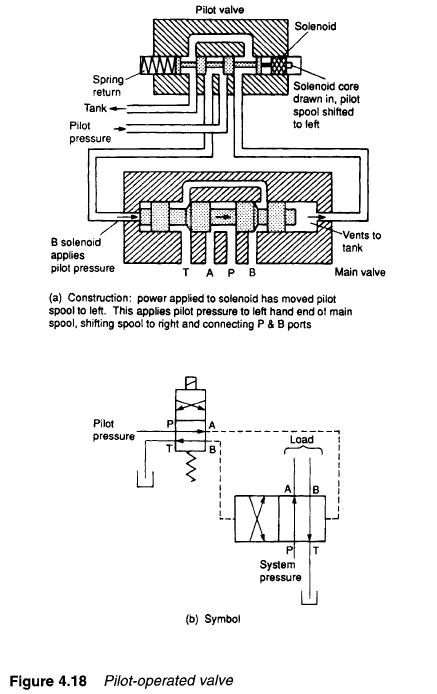